I am in the midst of a marvelous week of summer break. To kick it off, Joe, Charlie, Sarah, Tom, and I decided to hike up to a hidden lake in the area to fish for grayling and camp for a night. Joe and Charlie and I have had this particular fishing trip in mind for awhile, knowing that it is one of the last places in the Greater Yellowstone Ecosystem that still supports grayling, rumored to be a beautiful relative of the mountain whitefish. Apparently this particular lake was stocked with a nonnative grayling species which has taken off there and overpopulated to the point of causing stunted growth in some of the individuals. It seemed like a good place to catch and eat a beautiful fish.

Given that none of us owned a good map to the area–and the only trails to the lake were unofficial anglers’ trails– we relied on a Google Earth satellite image to figure out the way. It began with a forest service road where I had to park my Honda Civic and get into the bed of Tom’s truck with Charlie, Joe, and our packs. We bumped along the dirt road with gorgeous views of the Tetons and spurs of unmarked roads occasionally jutting from either side of the main road. 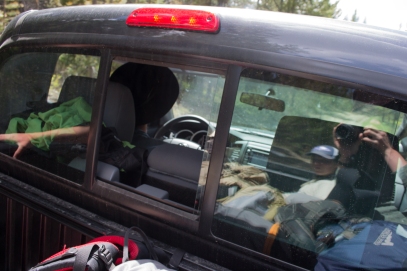 After only one turnaround to double check where we were supposed to be, we made it to the parking area near the “trail” to the lake. Based on Google Earth, the lake was only one mile from where we parked: through a meadow, up and along a ridge, then down the other side. We made it through the meadow and up most of the ridge before we realized there was still several feet of snow on most of the ground in the forest. None of us had packed gaiters, so we reassessed our plan and settled upon the reality of wet feet and boots to come. When we were nearly to the other side of the ridge, we recognized signs of what looked like a microburst: full grown trees laying down in every direction. 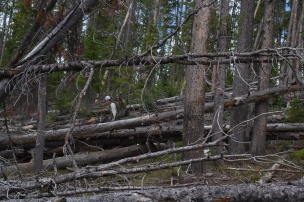 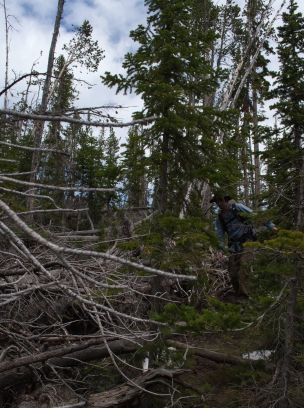 These large obstacles in addition to the deep snow and our heavy packs made for slow, risky going. Stepping along the logs might cause us to slip and fall upon a sharp branch, but stepping between the logs meant the potential of post-holing deep between invisible logs that could break an ankle or impale a calf. We were slow and deliberate; remarkably, no one was injured.

A thunderstorm appeared to be coming in quickly and Tom realized he had lost his rod on the hike. He took off to retrace his steps, bear spray in hand, while the rest of us puzzled over where to set up camp. There were many trees down around most of the lake; where there was no snow, there were tall snags which could be struck by lightning and/or blown onto our tents. So an open snowy patch surrounded by evenly grown live conifers was the best campsite we could find.

Despite being about 3:00pm, the sky darkened, the wind started to pick up, small raindrops started to fall, and thunder rumbled in the distance. Fortunately, just as we started to get anxious about where Tom was, he returned–no rod in hand, however. The thunder circled all the way around the lake, yet we saw no lightning. We collected some firewood from the ample deadfall around the lake and set up a bear hang within which we placed all our odorous items. The skies cleared momentarily, so we all took advantage of the fishing opportunity. Losing his rod didn’t stop Tom from fishing; he found a conifer branch and attached his reel, line, and fly to it. He named his new rod “Sap.” And yes, he did catch several grayling on this setup.

Extraordinarily, within less than a half hour of everyone fishing, everyone had caught at least one grayling–Sarah, for the first time ever on a fly.

Grayling are a beautiful fish–impossible to do justice with a photograph, though Charlie took some amazing photos of them which he posted on his blog. Their fan-like dorsal fin sports the most imaginative colors, like the iridescense hiding in the feathers of a magpie or starling but organized into spots and lines that appear to change color altogether depending on the quality of light that hits it. A classic experience outdoors that can only be captured in person. A friend once described grayling as “mountain whitefish…on LSD!”

Before long, I realized that someone needed to to get a fire going if we wanted supper (and warmth) at a reasonable hour, so I went about collecting some rocks (mostly striped purple and red sandstone) for a fire ring, then dead pine bark, cones, fir boughs, and small sticks. Joe found me some clumps of pine pitch that had attempted to expel some pine beetles; I lit those, placed them on a piece of bark in the center of my pyramid of dry barks and boughs, and the fire was raging in no time…as was the wind…

The skies darkened as everyone finished putting away his or her fishing gear. We layered up and added more wood to the fire as rain started to fall and thunder again rumbled in the distance. Joe began to teach Sarah how to gut the five fish we kept (in the cold, wet, windy weather–not the best way to learn, but she did great!) while Charlie, Tom, and I watched the fire and found some green branches to spear the grayling on. Per Joe’s research on how best to cook grayling by the fire, we used a Japanese method of spearing the gutted fish, salting them, and sticking the spears of fish into the dirt surrounding the fire.

Just as we were ready to eat, the skies cleared and the wind died. The grayling complemented our tacos nicely.

Sadly, through gutting all the fish, Joe and Sarah realized that all the fish we kept were females full of eggs. Not ones to waste food or show any disrespect towards the lives we took, we decided to make caviar, which we enjoyed for lunch the next day along with bread and cheese. If only we’d had brie instead of colby jack! First modern example of backcountry caviar? Perhaps. 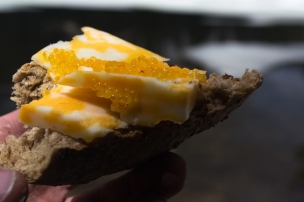 The rest of our time at this hidden lake involved more fishing, chatting, and relaxing by the fire. After we enjoyed our caviar lunch the second day, we decided it was time to hike back to the truck. It should only have been a one mile hike, but the downed trees, snow, and careful looking for Tom’s rod confused all of our senses of direction. Just as we had about given up the quest for finding Tom’s rod amid the labyrinth of snow and fallen trees, Joe spotted the burgundy case with the rod safely nestled within! Luck was on our side for the moment… but we swiftly found ourselves unsure about how to get back to the meadow. After a few circles and deliberate conversations about our literal and figurative next steps, we made it to the meadow that gave us back our confidence in our location–and some final glimpses of the wildflowers that had already passed at lower elevations but were still in their full glory at this higher elevation. 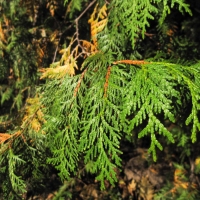